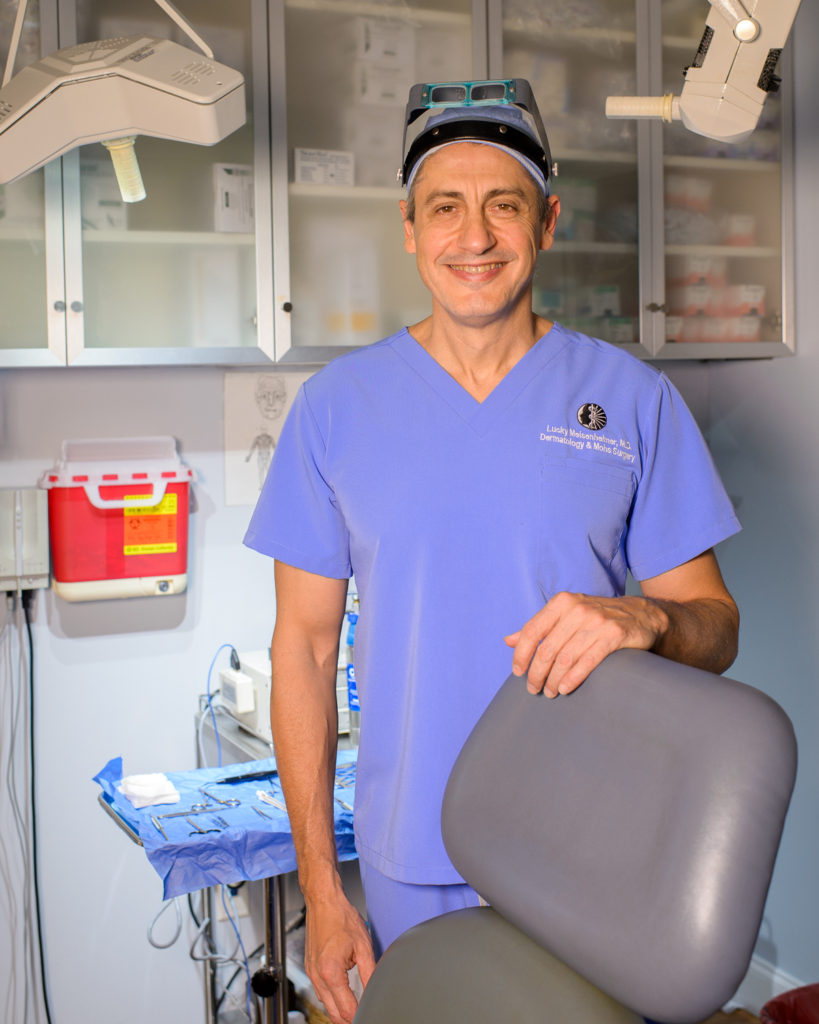 Dr. Meisenheimer completed his undergraduate training at Eastern Kentucky University majoring in Pre-Medical Science in 1979. He then attended the University of Kentucky Medical School (class of 1983). He completed his internship at Tucson Medical Center followed by his dermatology residency at the Medical University of South Carolina where he served as chief resident in 1987. At that time, he also became board certified in Dermatology and became a Fellow of the American Academy of Dermatology. He opened his solo practice at Medplex in 1987 “The Meisenheimer Clinic – Dermatology and Mohs Surgery” where he continues to practice today.

Dr. Meisenheimer has had several scientific publications which have included such journals as Journal of the American Academy of Dermatology, Annals of Emergency Medicine, The Journal of Drugs in Dermatology, and the Online Journal of Dermatology. He has served as a past president and program director of the Central Florida Society of Dermatology and served as the chief of the Dermatology Division at Orlando Regional Health System (ORHS) from 2003 to 20015. Currently, he writes the dermatology column for FloridaMD Magazine.

Dr. Meisenheimer, his wife and three sons reside in Southwest Orlando. He is involved in the local community where he has been on the Board of Directors at the YMCA Aquatic Center since 1992. He has also volunteered as the coach of the Orange County Special Olympics “Man-O-War Swim Team” since 1993.

Dr. Meisenheimer is also considered the world’s authority on the history and collecting of the yo-yo. He is author of the book, “Lucky’s Collectors Guide to 20th Century Yo-Yos”, which is preserved in the Smithsonian Institution’s National Museum of American History Collection. He also holds the Guinness World Record for the Largest Yo-Yo Collection www.yo-yos.net. He serves as Chairman of both the History and Collecting Committee and World Records Committee for the American Yo-Yo Association. His film company has produced two yo-yo based DVDs “2003 World Yo-Yo Championships” and “Yo-Yo Kings” as well as several other film projects.

Dr. Meisenheimer is also the critically acclaimed author of the science fiction thriller  “The Immune,” www.theimmune.com which won the International Book Award for Science Fiction in 2012. His third book, “The Zombie Cause Dictionary”, was also released in 2012, “The Zombie Cause.” www.thezombiecause.com

Over the years, he has garnered a plethora of unusual accomplishments such as being featured in “Ripley’s Believe It or Not” for swimming a half-mile with his foot in his mouth, wrestling Victor the Wrestling Bear, being honored as a muzzle-loading, rifle-shooting champion, breaking world records for ear wiggling, and more. All of his eccentric talents and boundless charisma have landed him guest appearances on national television shows such as The Martha Stewart Show, CBS Evening News, Real People, PM Magazine, Nickelodeon, National Lampoon’s Comedy Night School, Treasures in Your Home, and others.

Finally, Dr. Meisenheimer has been a competitive swimmer for over 40 years. He has continued his swimming winning Masters’ National Titles and setting Masters’ World Records. He has attained a Level 5 Coaching Certification for Masters’ Swimming. Last but certainly not least, he has garnered international fame and a cult-like following by hosting open water swims at his home on Lake Cane since 1989. www.luckyslakeswim.com