This patient information and photograph on Orlando Hand Fungus Treatment, TINEA MANUM is provided by John L. Meisenheimer, M.D. a board certified Dermatologist and skin care specialist based in Orlando, Florida. This information is not intended as a substitute for the medical advice or treatment of a dermatologist or other physician.

Tinea Manum is a skin infection of the hands. In common terms this disorder is known as a “hand fungus”. It can occur at any age but is more common in adults. Typically it appears as an itchy, scaly, rash on the palms of the hands and between the fingers. It is not uncommon to have only one hand involved. Frequently it is misdiagnosed as a hand eczema. Severe cases may result in cracks or fissures forming in the skin. 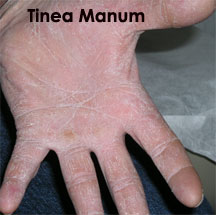 Tinea Manum is a fungal infection of the hands. The fungus grows best in warm moist places , and it has a tendency to worsen during the summer due to increased sweating. While your in my office, a simple lab test can be done to confirm the diagnosis.

For the typical healthy person Tinea manum is a harmless disorder, but severe cases may become secondarily infected with bacteria.

The treatment program I put you on will help control or clear the disorder, but it is not a permanent cure. Even if the Tinea Manum is totally cleared, you will still be predisposed to have repeat episodes. Repeat treatments may be needed and some individuals will require continuous therapy.

The fungus which causes Tinea Manum can affect other areas of the skin, and it will commonly be seen in association with Tinea Pedis “athletes foot”.

Tinea Manum is contagious to people who have limited immunity to the fungus. Since the fungus is found in so many places, it is almost impossible to avoid contact.