This patient information on Orlando Ringworm Treatment, TINEA CAPITIS is provided by John L. Meisenheimer, M.D. a board certified Dermatologist and skin care specialist based in Orlando, Florida. This information is not intended as a substitute for the medical advice or treatment of a dermatologist or other physician. 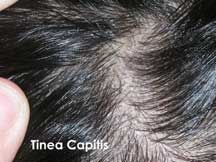 Tinea capitis is an infection of the scalp. In common terms this disease is known
as “ringworm of the scalp”. It can occur at any age, but it is more frequently seen in children. Typically it appears as diffuse hair loss with scaling of the scalp, but occasionally it causes a ring like patch of hair loss.

Although called ringworm, this infection is not caused by a worm. The cause of ringworm is a fungus. This infection occurs on people who have limited immunity to the fungus. Children have poorer immunity to this fungus than adults so they are more frequently infected.

For the typical healthy person Tinea capitis is a harmless disorder. It is not related to cancer and it does not involve internal organs.

Tinea capitis infection usually responds well to treatment, but treatment takes many weeks to complete. Lost hair usually re-grows unless the infection was so severe that scarring resulted.

Will it come back?

The infection typically stays confined to the scalp, but occasionally it may spread to non-hair bearing areas.

Tinea capitis is infectious to people who have limited immunity to the fungus. It is common to see more than one child in a family infected at the same time. Once treatment has begun no special precautions are needed, and the child may return to school.