This patient information and photograph of epithelial cyst is provided by John L. Meisenheimer, M.D. a board certified Dermatologist and skin care specialist based in Orlando, Florida. This information is not intended as a substitute for the medical advice or treatment of a dermatologist or other physician. 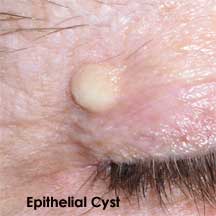 Epithelial Cysts (sometimes incorrectly called sebaceous cysts) are one of the most common growths that occur on or just under the skin. These are harmless, smooth surfaced nodules that are felt just below the skin surface. Deeper Epithelial cysts are usually skin color on the surface. Some may have a central black-head like pore. More superficial cysts may have a yellow-white color. Sometimes epithelial cysts can be felt better than they can be seen. They can grow anywhere, but they are most common on the torso. Although children can develop these cysts, most Epithelial Cysts develop after puberty.

Epithelial cysts are like a skin sack that has folded in on itself. The cyst wall produces skin cells but unlike normal skin the skin debris is trapped rather than shedding. It is this build up of dead skin cells that causes the cyst to enlarge. Genetics play a role in the formation of Epithelial Cysts. Some families have a tendency to develop more cysts than others.

Epithelial Cysts are harmless, but sometimes they can rupture causing an epithelial cyst abscess. Although I remove many of them for cosmetic reasons, removal is not necessary unless they are irritated, inflamed or suspicious.

Epithelial Cysts are easily removed, but insurance considers this cosmetic unless they are inflamed, irritated or clinically suspicious. Some Epithelial Cysts may re-grow after removal, but most do not.

New ones usually continue to appear as you get older.

Epithelial Cysts are not contagious and you can not “catch” them from anyone.