This patient information and photographs on Erythema infectiosum/Fifth Disease are provided by John L. Meisenheimer, M.D. a board certified Dermatologist and skin care specialist based in Orlando, Florida. This information is not intended as a substitute for the medical advice or treatment of a dermatologist or other physician. 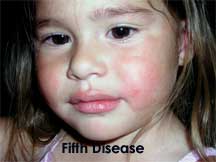 Erythema infectiosum more commonly known as Fifth disease is a peculiar disorder of the skin. The condition commonly affects children and young adults. Typically it appears as a red rash on the face that gives a slapped cheek appearance. A few days later a fish net like pattern of redness may appear on the arms and trunk.

Fifth disease is caused by a virus. The virus is a parvovirus, but not related to the parvovirus that pets may get. You cannot get this parvovirus from an animal. This is a mild virus, and most people feel well when infected. A few people may have minor itching, tiredness, a sore throat, or a slight fever.

For the typical healthy person fifth disease is a harmless disorder. it is not related to cancer and it does not involve internal organs. The infected person rarely becomes ill. In pregnant women these is a potential problem for the fetus if infection occurs. Fortunately over half of pregnant women have immunity to the virus and cannot catch it.

It will gradually fade over about one month. It commonly fades and reappears several times during the month. Excessive exposure to sun, temperature changes and emotional upsets may stimulate a reappearance.

It stays limited to areas of skin discussed above.

It is highly contagious to those who have not had a previous infection. Unfortunately Erythema infectiosum is contagious before the rash appears, not after. There is no way to prevent exposure. Because it is such a mild infection no special precautions need to be taken, and children do not need to be kept home from school as they are not contagious once the rash appears.