This patient information and photograph on Miliaria “Prickly Heat is provided by John L. Meisenheimer, M.D. a board certified Dermatologist and skin care specialist based in Orlando, Florida. This information is not intended as a substitute for the medical advice or treatment of a dermatologist or other physician. 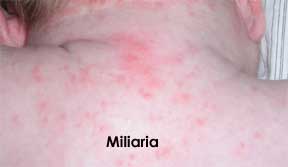 Miliaria, commonly called “prickly heat” is a very common form of skin rash in babies. Although it can occur at any age it is most frequently seen in neonates and infants. Small red bumps will appear scattered on the skin generally in areas that covered clothing, swaddling etc.. In neonates it may be seen more on the head and neck. It generally appears after exposure to heat and humidity. In adults it is most frequently seen with illness where there have been fevers, or in those that have just moved to a hot humid climate. Miliaria is very common in tropical environments.

Miliaria “Prickly Heat” is caused by blockage of the sweat gland ducts. Sweat ducts are small “tubes” that carry sweat from the glands under the skin to the surface of the skin. When these tubes are blocked the sweat builds up in the “tube” and the tube ruptures. This is more likely to happen if the sweat ducts are immature as in neonates, and if the skin is covered with heavy clothes in a hot humid environment. The heat and humidity causes the sweat to pool on the skin surface which makes the outer skin swell. This swelling of the outer skin blocks the openings of the sweat duct.

There are three types of Miliaria based on where the rupture of the sweat duct occurs. With Miliaria crystallina the blockage is high just near the surface of the skin. The bumps are not red and they typically don’t bother a person. With Miliaria Rubra the leakage is mid way down the duct, and the bumps are red and may sting or itch. Miliaria Profunda is due to repeat bouts of Miliaria Rubra. In the Profunda form the leakage is deep, the bumps occur about an hour after exercise and are skin colored and bigger but typically don’t have any symptoms.

Miliaria “Prickly Heat” is not dangerous. In occasional rare cases there can be secondary bacterial infection that may require treatment. If there has been wide spread Miliaria a person may become heat intolerant for a few weeks because the sweat glands stop working correctly. In recurrent severe cases, where many sweat glands are destroyed, a few may develop a permanent heat intolerance due to the lack of the ability to sweat. This is a extremely rare complication of Miliaria.

Generally Miliaria clears on it own if one moves to a cooler environment and does not heavily cover the skin with clothing or wraps. The bumps typically clear over a few days.

Miliaria “Prickly Heat” is not contagious and you cannot “catch it” from anyone.