This patient information and photograph on Orlando Foot Fungus Treatment, Pitted Keratolysis is provided by John L. Meisenheimer, M.D. a board certified Dermatologist and skin care specialist based in Orlando, Florida. This information is not intended as a substitute for the medical advice or treatment of a dermatologist or other physician.

Pitted keratolysis is a distinctive non-inflammatory bacterial infection of the soles of the feet that is characterized by appearance of pits on the soles. The feet also commonly have an associated bad odor. 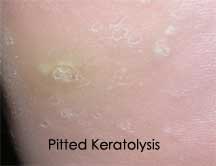 Pitted keratolysis is a relatively common disorder, although it is often overlooked. Moist occluded feet allow for bacteria to overgrow on the soles. By products from the overgrowth of the bacteria cause the outer layers of the skin to breakdown forming pits. These chemical by products also cause the foul odor, which is frequently associated with pitted keratolysis. It may occur as an occupational disorder among industrial workers, as well as running enthusiasts, and in others whom the feet may be moist.

Pitted keratolysis is not a dangerous condition. The lesions may appear rather prominent from a brown coloration due to encrustation of dirt in people who walk barefoot. Other than in visual effect, the lesions are usually an incidental finding and are often unnoticed by patients and are rather distressed by the visual appearance of holes in their feet that has appeared inexplicably. In many cases, the chief complaint is excessive sweating (hyperhydrosis) of the feet.

There are a number of successful treatments. Keeping the feet dry is important. Patients should avoid wearing plastic or rubber shoes and should opt for open sandals or leather shoes. Also, socks should preferably be cotton and not synthetic plastics, like polyester.

Pitted keratolysis stays limited to the soles of the feet and rarely the palms of the hands.

Pitted keratolysis is not contagious and you cannot “catch it” from anyone.